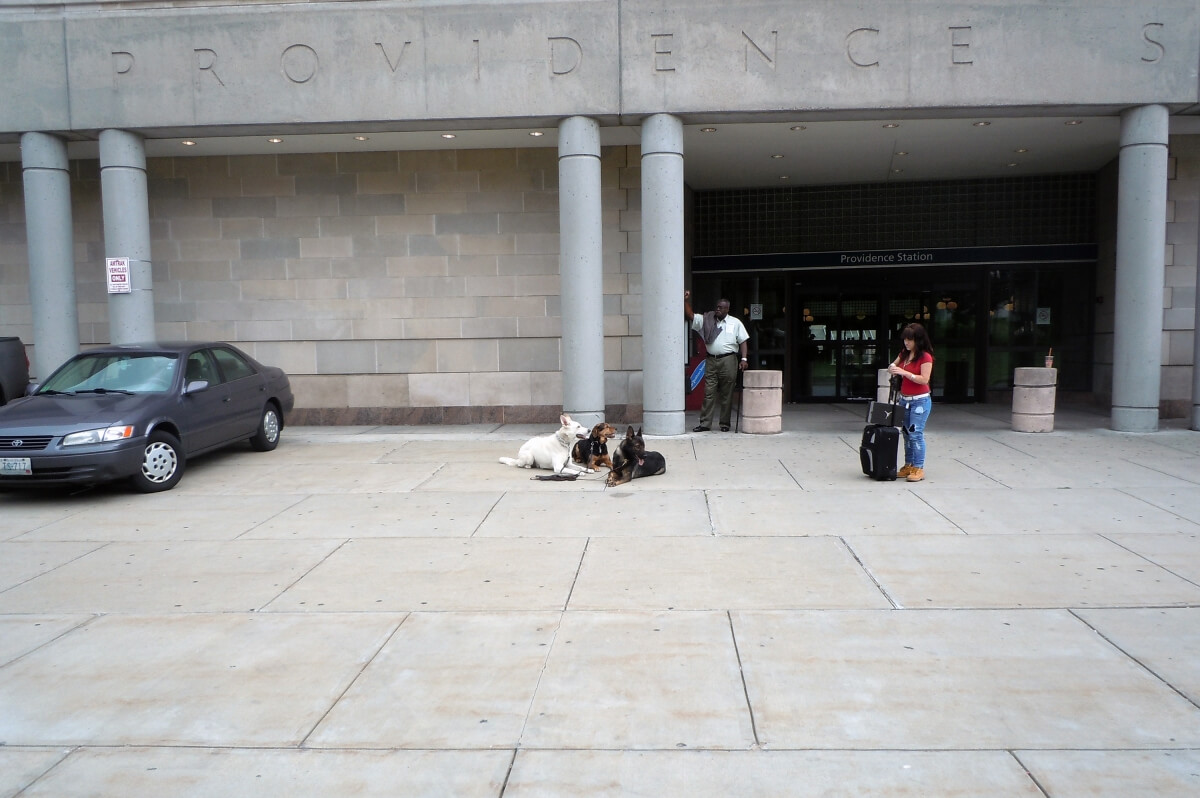 I am often asked about my dog training methods and dog training philosophy. As I explain, I generally think about the two (extreme opposite) main dog training schools of thought. There's the "purely positive" training camp where the consensus seems to be that "pack leadership" is nonsense, and that the training of your dog should be only fun for the dog, with no corrections, and no "harsh" treatment. Basically, you are supposed to ignore un-wanted behavior, and reward desirable behavior. Tools of the trade include treat bags, "clickers," "gentle leaders" or "halties" and lots of patience.

Then there's the so-called "old school" or "yank and crank" trainers who use lots of aversive or "escape/avoidance" techniques to teach their dogs behaviors. The "yank and crank" trainers are often (often justifiably) called "abusive." Basically, the dog is made uncomfortable until he/she complies with the trainer's wishes. Often tools like choke collars and electronic collars are used. So, which is better? Is one better than the other? More effective? Perhaps the answer is not so simple … To find the answers, it is useful to take a look at how a dog learns to be a dog - from his mother and siblings.

When puppies are born, they are blind and deaf. They experience the world thru touch and smell. When they start to move around, mother is always watching carefully - if they accidentally wander outside of the safe zone (think "den"), she will calmly go and get them and pick them up and bring them back to safety. No stress, no fanfare - just calm, assertive action. As the puppies get a bit older and they start to wander out of the safe zone, the mother will do the same thing, but this time with more emphasis/energy; she teaches them that what they are doing (wandering out into possible danger) is not going to be tolerated. When the puppies get out of hand, she will grab them and sometimes even shake them a little to let them know that they are crossing a line that must not be crossed. Bear in mind that wandering outside the safe zone can be fatal to the puppy - anything from owls and hawks to fisher cats and coyotes might find the puppy to be a great snack. Would you expect the mother to "ignore" that behavior and wait for the puppies to learn it on their own? Probably not. When dealing with a potentially life-threatening situation, there is no time to "ignore" bad behavior. The corrections are immediate, and often appear to be "severe." The good news is that those "severe" corrections will not only possibly preserve the puppy's life, but won't have to be repeated over and over.

Fast-forward to when the puppies are old enough to accompany the pack in movement and hunting. The leader of the pack (commonly called the "alpha" dog) walks out front and makes ALL the decisions about what to hunt, when to walk or move the pack, when to settle down, and with what or whom to engage. If one of the subordinate dogs does not comply, the leader of the pack will issue a very firm and convincing correction - one designed to immediately convince the subordinate dog that non-compliance is not an option. If the subordinate dog persists, he/she will be driven out of the pack, or even killed. There's good evolutionary cause for this behavior. If the pack leader (who has become such by virtue of age, experience, toughness, attitude and wisdom) is unable to lead, the pack is in danger. A house divided cannot stand, and an undisciplined pack cannot hunt effectively. So why all this talk about pack corrections? Simple. It should make sense that training a dog in the way he is genetically programmed to learn is the most effective way to train him.

Let me be clear: I am not advocating abuse, or un-necessarily harsh treatment for any dog. What I AM advocating is a common-sense approach to dog training. If your dog is mis-behaving in ways that are dangerous, such as refusing to stop when you tell him to stop, jumping up on you or children or elderly people, chasing cars, attacking other dogs, etc., there is simply no wisdom in ignoring that behavior and waiting for the dog to decide to stop so you can give him a treat. In other words, corrections are necessary if you want your dog to understand that you are the leader and that he/she must comply. The good news is that dogs are "hard-wired" to learn this way.

So, what about "positive" dog training?

So, is there any validity to the "purely positive" approach? In a word, yes! But as with anything, there must be balance and a healthy dose of common sense. As an example, let's assume the goal is to have your dog sit politely at your feet and look at you when you call him. The "purely positive" method would be something like this: Call "Fido" and simply stand there waiting for him to figure out that if he sits and looks up at you, he will get a treat. This is where the "clicker" often comes into play. The dog runs over to you and you "click" and give him a treat. Nothing is said, and the dog is simply allowed to "try things" to get the reward. Eventually, the dog sits. You click and give him a reward. If he jumps up on you or scratches at you with his paw or simply wanders around aimlessly, that is ignored. This way of training is fun! You get to watch "Fido" figure out what you want, and watch him learn that there is a reward for doing it. Everybody's having fun, there's no discomfort for the dog, and the dog is learning that he gets good stuff if he does the right thing. So what could be wrong with that? Plenty.

Often this is where the training stops. Sure the dog eventually learns that there is a treat in it for him when he hears the "click" … and that he can get the "click" to happen by sitting and looking up at you. But what happens when the dog decides that the passing squirrel on the other side of the busy street where you are walking is more interesting than your treat? Can you afford to wait in this instance for the dog to decide to do the right thing and ignore the bad behavior? That defies common sense.

Let's take another look at the pack model we discussed earlier. Picture the pack out on a hunt. One of the subordinate dogs decides that a passing car would be fun to attack. He runs out in front of the pack leader and gives chase. If he gets hit by that car, he will most likely die. If he dies, the pack is then fractured, and there will be (often violent) struggle to re-establish the rank and hierarchy in the pack among the subordinates. The pack is weakened as is their ability to hunt effectively and to defend themselves. Would the pack leader tolerate this behavior? Of course not! The reaction would begin immediately when the subordinate dog gives the slightest signal that he is about to disrespect the leader's authority. The correction would be clear, very convincing, and even violent if necessary. Often, a simple look or growl is all it takes to remind the subordinate of his place. The reward for doing the right thing is that he is allowed to continue to enjoy the safety and security of the pack and doesn't need to worry about making the tough decisions of leadership. He is protected, provided for (or led to sustenance) and generally looked after. It generally only takes one or two of these corrections to completely extinguish the tendency to be insubordinate.

So how does this translate to our training? We have several advantages. We have the ability to apply complex reasoning, and the ability to control and correct our dogs without having to physically fight them. We have the ability to make rewards immediate, obvious, and even delicious. We also have the ability to examine and learn to understand canine body language and communication. Using these abilities gives us the power to influence our dogs for the good of the "pack" and their own well-being. That's good news! We can use that canine language to communicate to the dog what we expect, and to influence the dog to see us as the leaders of the pack. There is no need to yell, or hit the dog … being calm, assertive, and not taking "no" for an answer is the key.

Training your dog is easy if you are established in the dog's mind as the "leader of the pack." Once established, you can expect the dog to show signs of respect and many unwanted behaviors will just disappear. Imagine walking your dog and not having to worry about him darting off to chase or attack another dog. Imagine walking your dog and having an untrained dog pulling and lunging while the owner haplessly gets pulled toward you. Imagine your dog calmly standing behind you, waiting for you to decide if this crazy untrained beast should be engaged. Impossible, you say? I say you're wrong.

In my next article, I will discuss more fully the ways in which you can influence your dog to see you as the "leader of the pack" and to look to you for guidance.